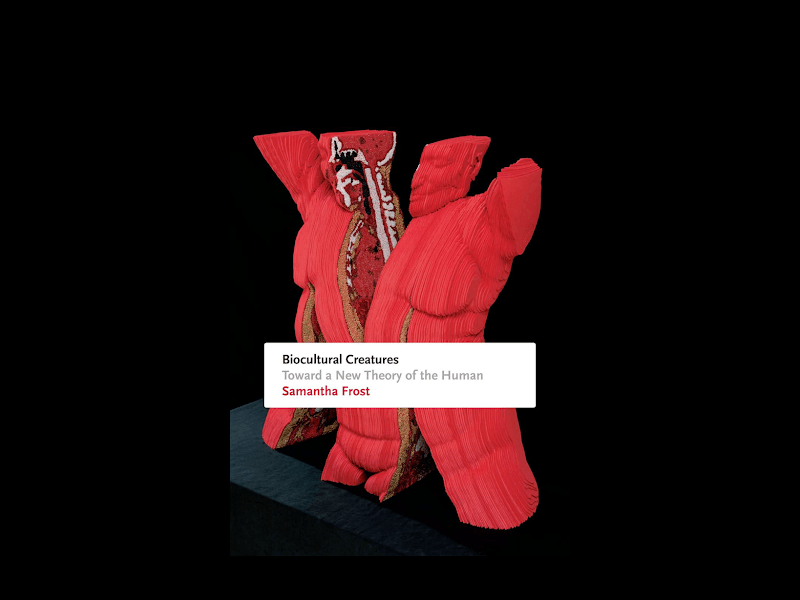 With my colleagues Seth Brown and James Goring I am developing a chapter  – Being young’, ‘living well’, in/beyond the pandemic: Exploring the entanglements between COVID-19, the Anthropocene and young people’s wellbeing – for an edited collection to be published in 2022 titled, Wellbeing: Global Policies and Perspectives

Using the stories of three young people – Michael, Ruth and Chloe that were told to us in a project on COVID Recovery Scenarios for Young People in Melbourne’s Inner North – our intent is to contribute to the troubling of the sociological orthodoxies that are differently implicated in the construction and critique of young people’s wellbeing (see the link here to the blog for this project).

To do this work we want to move towards an understanding of young people such as Michael, Ruth and Chloe as ‘biocultural creatures’ who are entangled with diverse others – human and non-human, material and immaterial – in ‘biocultural habitats’ (Frost 2016). And to suggest that these entanglements between biocultural creatures and biocultural habits enable us to think differently about the materiality of young people’s wellbeing in ways that move beyond tendencies to imagine wellbeing in ways that privilege the autonomous, rational, choice making, individual young human.

Julia Coffey’s (2020: 2) recent exploration of the embodied dimensions of young people’s wellbeing, emerges from ‘sociological critiques highlighting the individualizing effects of wellbeing discourses’. Building on the legacy of Deleuze and Spinoza, and the work done more recently in new materialist understandings of ‘affect’, Coffey develops a ‘specific focus on embodied sensations and “felt” dimensions of wellbeing, and what these “do” in the context of young people’s negotiation of the conditions and constraints of their everyday lives’.

Coffey’s (2020: 13) work, in which she explores ‘how embodied, affective, and sensate processes are crucial in producing the possibilities for wellbeing in everyday life’, provides both a point of departure from more orthodox sociological critiques of discourses of young people’s wellbeing, and a connection to recent work which we have done, and which we build on here in thinking about the stories of Michael, Ruth and Chloe, and the other young people who participated in our project (Kelly, Goring and Noonan 2021, Brown, Kelly and Phillips 2020).

This point of departure relates to the tendency of sociologies of youth to invoke the materialities of the human body but to then not explore the depths and different scales of this materiality. There appear to be ‘sociological limits’ beyond which it is not possible to venture. In addition, human embodiedness is just that. It is about the human as it exists in socio-cultural contexts that appear as distinct from other ‘creatures’ and the ‘natural habitats’ that are Other to humans and the social.

Our ‘guide’ in doing this work is Samantha Frost’s (2016) Biocultural Creatures: Toward a New Theory of the Human.

Frost’s (2016) move to reconfigure the human in terms of her key concept of ‘biocultural creatures’ offers productive ways to think about young people’s wellbeing in ways that move beyond anthropocentrism and, at the same time, compel us to think about their/our embodied materiality. Their/our different capabilities and vulnerabilities that emerge from and alongside the matter-of-factness of such things as their/our flesh and blood, their/our gut biomes, their/our organs and (neuro-diverse) brains, and the bio-chemical and electro-materiality that make ‘life’ possible. Those things that biology and chemistry and physics and neuro-science concern themselves with, but which, as Frost also argues, the humanities and social sciences have tended to ignore and/or discount for various reasons including critiques of the often reductionist logics of these ‘hard sciences’. 1

To think of young humans (all humans) as ‘creatures’ is, for Frost (2016: 3-4), a means by which we can be ‘held to account for human creatureliness, for the ways that humans, like all other creatures, are alive and are able to stay alive because they are embedded in and draw manifold forms of sustenance from a habitat of some kind’. This move beyond forms of human exceptionalism is a refusal of the ‘hubristic exception that would make humans a bizarre and almost unthinkable living phenomenon, abstracted from the habitats that are the condition of their being able to live’. If we are ‘creaturely’, we are also ‘biocultural’. As Frost (2016: 4) observes, all creatures are ‘biocultural in the sense that they develop, grow, persist, and die in an environment or habitat that is the condition for their development, growth, persistence, and death’.

The term, she suggests, achieves a number of things, including that it establishes ‘a conceptual binding or a constraint such that we can no longer disavow what has been most vehemently disavowed — our biological, organismic, living animality’; and it ‘encapsulates the mutual constitution of body and environment, of biology and habitat that has been so central to the challenge to the category of the human’ (Frost 2016: 25).

Her intent is ‘to figure humans in a way that does not exclude materiality, “objectness,” animality, or embeddedness in habitats’, and to do so in ways that start ‘with energy and atoms and works up through the scales of molecules, cells, proteins, to gross organisms . . . and ends by merely gesturing to humans’ (Frost 2016: 25).

In a series of chapters that progress from the scale of the molecular to that of the ‘gross organism’, Frost (2016) covers ground that might be familiar to those ‘disciplined’ in the bio-chemical and neurological sciences, but which might seem strange and ‘dangerous’ for those who want to do critical sociologies of young people’s wellbeing. Strange because this is ground that is made through different objects of knowledge, different forms of knowledge, and different types of knowledge practices (Law and Mol 2006). Dangerous because this is ground that doesn’t appear, at first glance, to be concerned with gender, or class, or ethnicity, or ability, or geography – those socio-cultural categories and concepts that are the staple of such sociologies.

In a chapter titled Membranes, Frost (2016: 75) seeks to unsettle the boundedness, the ‘methodological individualism’ (Haraway 2016), that underpins our sense of young people/ourselves as discrete, autonomous individuals. She does this by identifying and thinking with the ‘porosity’ of cellular membranes in ways that define ‘not a substantive distinction between inside and outside the cell but rather a distinction concerning biochemical reactions’. As she (Frost 2016: 73) demonstrates, this ‘porosity enables a cell to respond to its own biochemical activity as well as to changes in its environs’:

Importantly, in ways that we can imagine move us from the scale of the molecular to the ‘gross organism’, this investment in the materiality and conceptuality of ‘porosity’ can enable us to ‘apprehend just how profoundly and fundamentally material and social environments get under the skin without at the same time losing the conceptual possibility of talking about organisms or bodies as particular distinct things’ (Frost 2016: 76). In bringing into the foreground the ‘activities and processes facilitated by the permeability of cell membranes’, Frost (2016: 76) argues that we can:

we draw attention to the traffic across the membrane, the influx and efflux, the absorption, recalibration, and response that together shape the biochemical activities within the body’s cells and shape the building, dismantling, development, growth, and engagement of that living organism with its social and material habitat.

Indeed, it is because of the porosity of cell membranes, that ‘an organism that lives in a social and material habitat — as organisms must and do — is unavoidably and ineluctably a biocultural creature’ (Frost 2016: 76).

In this sense, and in some sort of summary of what thinking in this way permits and entails, Frost (2016: 151) argues that the idea of humans as biocultural creatures ‘allows us to take account of the layered, multifaceted dimensions of perceptual response without falling prey to a biological, environmental, or cultural reductionism’. This warning against the trap of various forms of reductionism is suggestive of the ways in which critical sociologies of young people’s wellbeing can return to more familiar ground, even if in this return ‘familiarity’ is likely to be displaced by ‘strangeness’. The key concept here is bio-cultural habitats. For Frost (2016: 152) one of the more significant ‘implications of the conceptualization of humans as biocultural creatures is the reconfiguration of what we consider to fall under the rubric of “culture”’. As Frost (2016: 152) suggests:

If we lean on the idea that “culture” is the conditions, practices, and processes of culturing, then to work with the notion that humans are biocultural creatures is to bring within the ambit of “culture” all the chemical, spatial, thermal, viral, bacteriological, and nutritive factors, as well as all the social, political, aesthetic, and economic practices that in combination, and sometimes at cross-purposes, provide the conditions through which biocultural humans grow into subjects.

In engaging with the ways in which biocultural understandings of the human, and of biocultural habitats, emerge into and from political-scapes that are always already bio-political, always already ’necro-political’ (Braidotti 2013), and are characterized by advantages and disadvantages, marginalization, regulation, inclusion and exclusion, we need to develop a different sociological imagination, a different ‘biocultural politics’.

These concerns raise a number of points that can enable us to circle back to young people such as Michael, Ruth and Chloe, their hopes for ‘living well’, and how we might understand the entanglements between the virus, the disease that it causes, the pandemic, the public health, social, economic and political disruptions it has provoked, and the Anthropocene that produces more zoonotic diseases.

Frost’s work, and the work of others in the spaces that she explores, is, then, suggestive of a range of strange and dangerous trajectories for doing critical sociologies of young people’s wellbeing. For thinking about and puzzling with the possible senses that can be made of Michael, Ruby and Chloe’s anxieties, concerns, aspirations and hopes for their presents and futures, for being able to ‘live well’ as biocultural creatures in the habitats that provide them with differing opportunities and resources for that living. For ‘imagining’ the things that we might say about young people’s struggles to ‘live well’ in the diverse, necro-political, biocultural habitats characteristic of the Anthropocene – where COVID-19 might be a harbinger of larger, more widespread, more complex, challenges to come (Latour 2017).

If being human – being Michael, being Ruby, being Chloe, being young – is profoundly about the conditions under which we develop, grow, persist, and die in an environment or habitat that is the condition for our development, growth, persistence, and death, then what scale do we want to think at, and with, in doing critical sociologies of young people’s wellbeing? What biocultural creatures, objects, processes, habitats and entanglements should be imagined as being of interest at these different scales? And, finally, what sorts of habitats, and what sort of ‘biocultural politics’ will enable young people, in all their diversity as biocultural creatures, to ‘live well’ in the Anthropocene?