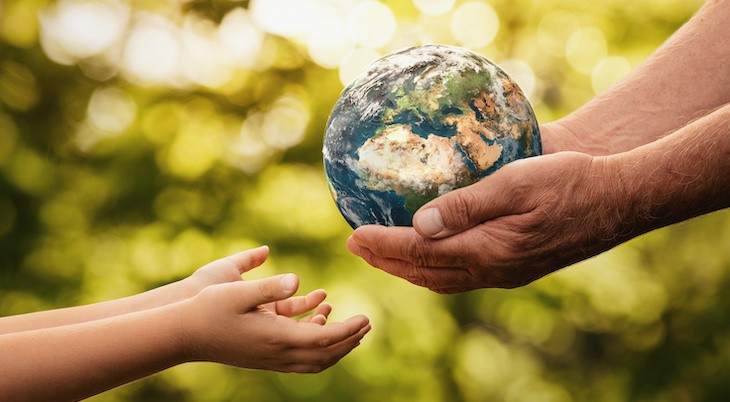 Our Common Future: The Idea of Intergenerational Justice

During September we will post a series of ‘stories’ on our Instagram account about how we (young and old) can think about intergenerational social, cultural, economic, political and climate justice.

In the context of the climate crisis, current ideas about intergenerational justice are focussed on contemporary populations of young people, and as yet un-born generations, and the futures that our past and present actions will visit on these generations.

Back in 1987, the so-called Brundtland Report (named for Gro Harlem Brundtland, the chair of the United Nations World Commission on Environment and Development) was released under the title of Our Common Future. The report first introduced the concept of sustainable development as being connected to the idea that present generations have a responsibility to future generations:

Humanity has the ability to make development sustainable to ensure that it meets the needs of the present without compromising the ability of future generations to meet their own needs.

The Sustainable Development Goals (SDGs): No Longer about Intergenerational Justice

In his book The Age of Sustainable Development, Jeffrey Sachs (2015), a Nobel Prize winning economist, and one of the chief architects of the UN SDG agenda indicates, points out that early definitions of sustainable development (drawing on the work of the Bruntland Report) embraced the concept of intergenerational responsibilities:

‘This ‘intergenerational’ concept of sustainable development was widely adopted, including at the Rio Earth Summit in 1992. One of the key principles of the Rio Declaration was that ‘development today must not threaten the needs of present and future generations.’

However, as Sachs (2015) indicates, in the move to frame the UN SDGs the intergenerational justice understanding of sustainable development changed:

‘Over time, however, the definition of sustainable development evolved into a more practical approach, focusing less on intergenerational needs and more on the holistic approach linking economic development, social inclusion, and environmental sustainability’.

What Should Intergenerational Justice Mean at the Start of the 21st century?

‘Human rights claims for future generations offer a strong moral motivation for us in the present to create meaningful policies…that protect them from harms and human rights infractions caused by climate change’.

No Pressure, But 80 Trillion People Are Still to be Born!!

In the context of the climate crisis and the crisis of capitalism, what responsibilities do we owe to young people and future generations? In a recent article in The Guardian, noted moral philosopher William MacAskill argues that we need to develop much longer term views to our moral obligations to future generations and the planet that they will live on.

In commentary on MacKaskill’s new book What We Owe the Future: A Million-Year View, The Guardian observes:

‘that we seem incapable of thinking, or even contemplating, 5,000 years in the future. That lies in the realm of science fiction’.

But MacKaskill’s estimate that 8 trillion humans are yet to be born, means that:

‘how long we last as a species and what kind of state of wellbeing we achieve…may have a lot to do with what decisions we make and actions we take at the moment and in the foreseeable future’.

MacKaskill suggests that long term thinking – which is the basis of intergenerational justice – goes against the grain in rapidly changing, short-term cultures such as those shaped by global capitalism. But in different First Nations contexts, which have long held traditions, there is evidence of longer term thinking:

‘The Iroquois in their oral constitution advocated concern for future generations…It seems like this was true for many Indigenous philosophies in Africa as well’.

A blogpost on Future Planet outlines how;

‘The Seventh Generation Principle is based on an ancient Haudenosaunee (Iroquois) philosophy that the decisions we make today should result in a sustainable world seven generations into the future.’

‘Think about that for a minute, if you were to consider how your actions today would impact the world 7 generations hence, how would that change what you do?  Think about it.’

In a recent blog, Reclaiming the future, Philipa Duthie, the Oceania Director for the Royal Society for Arts, Manufactures and Commerce (RSA) highlighted the ways in which groups of young people in Australia, Portugal, Canada and elsewhere, have taken legal action (often unsuccessful) to try to force governments to recognise the ethical, moral and governmental

Philipa observes that these young people:

Nick Cave, in a post to his The Red Hand Files, talks about the ‘indifference of the universe’. So much of the stuff of the bio-sphere and the cosmos – from the quantum scale to the forces driving the increasingly faster expansion of the universe – is ‘indifferent’ to how we think and feel about some of these issues.

So, we are faced with the fundamental challenge of scale. What temporal and spatial scales are we working with in thinking about pasts, presents and futures, and the relationships between places, eco-systems, earth systems, the bio-sphere, and the planet – 7 generations? 2050? 1000 years?

Building young people’s capabilities to deal with these entanglements of pasts, presents and futures seems fundamentally unjust! We are saying to them, You live with and clean up our mess!

In this context, any education for sustainable, or regenerative, or environmentally just futures should think about a number of things, including:

Prominent posthuman philosopher Rosi Braidotti has argued that hope is an ‘anticipatory virtue’ that can be used to structure an affirmative ethics and politics that can reimagine regenerative, sustainable futures

So, let’s stop using words such as pessimistic and optimistic when we discuss futures and the promise of intergenerational climate justice – and frame the conversations and actions that might deliver on that promise for young people through a radical politics of hope!